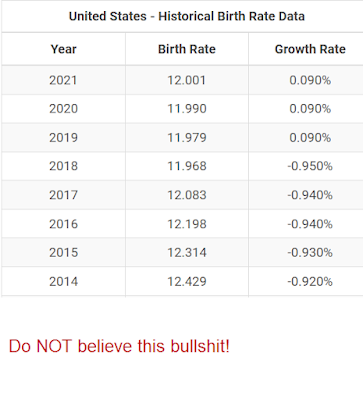 This first site is curious, noted also they are quoting UN Data.

This site says that US birth rates have gone up a little in both 2020 and 2021 compared to 2019.    That is vastly different than other data from CDC.

Perhaps the UN wants to hide the Fertility Elephant in the room, until it is beyond obvious.

And my new expected meme, maybe playing out now already, is that Population dropping is normal and healthy.

The December declines were led by states like California, which experienced a 19% drop that month. In the second half of the year, New Mexico, New York, Hawaii and West Virginia also posted substantial decreases, ranging from 8% to 11%.

Oh the mentioned meme has just been found, in the Durango Herald.   Ya think they
might have more common sense in Durango….but no they want to depopulate to “fight climate change”, on my.

Climate Terror has been on the backburner a bit, but it’s coming back strong.    This phys.org article makes the beyond the pale studiest statement I have ever seen….

It’s shameful, as Kilauea is set to erupt again, all driven by the solar cycle.

“Unfortunately, the results do not mean that nature will save us from

lots and lots more in the notes to this scathing letter, The Spartacus Letter –
https://cfgate.files.wordpress.com/2021/09/covid-19-the-spartacus-letter.pdf

Wow, that is some incredible research, going beyond what I have done. I have converted it to a Word document and shall archive and publish at nukepro with attribution. I fear this author is going to have an auto accident. 2 of those arrested on Jan 6th (and released, as their “charges” were even less than those political prisoners held without bail, trial, etc.) have died, one in an auto accident and one by unknown cause (unreported at least) at age of 61.